Posted by Ram
· No Comments

The Netherlands, Switzerland, the United Kingdom, Singapore and Ireland are among the rich countries that funnel major corporate money into secret offshore tax shelters, according to a new study 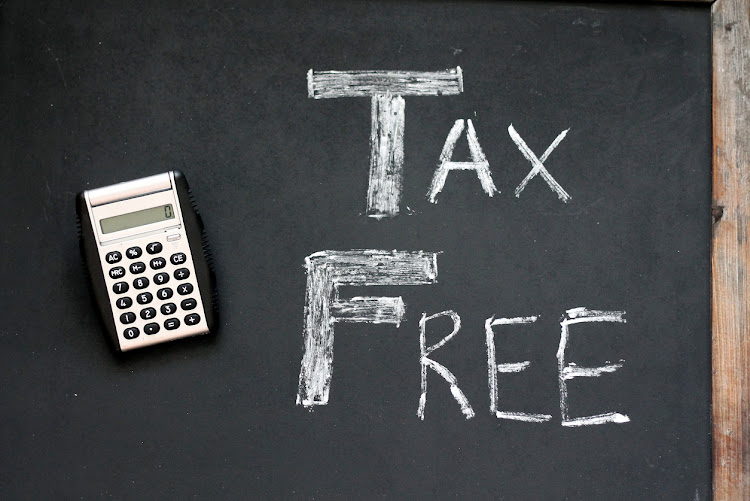 First came the Panama Papers, then the BahamasLeaks. Journalists continue to shed light on and raise a public outcry over the offshore financial centres that corporations use to reduce their tax bill – something that is still being challenged in court.

A new study has now uncovered all the world’s corporate tax havens and, for the first time, revealed the intermediary countries that companies use to funnel their money into these places.

Published on July 24 in the academic journal Scientific Reports, the paper Uncovering Offshore Financial Centers: Conduits and Sinks in the Global Corporate Ownership Network shows that offshore finance is not the exclusive business of exotic, far-flung places such as the Cayman Islands and Bermuda.

The Netherlands and the United Kingdom also play a crucial – although a heretofore obscure – role in the tax-avoidance game, acting as conduits for corporate profits as they make their way tax havens.

What makes a tax shelter

Tax havens are a popular, legal and often secret instrument for multinational corporations to move capital across borders. By taking advantage of loopholes in various national legislations and placing operations in countries with low taxes, companies can reduce their tax rate from around 35% to 25% to 15% or lower. 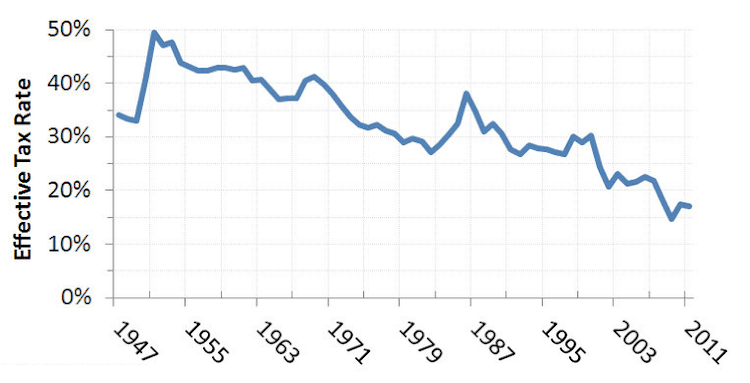 Silicon Valley companies have become expert at this tactic. Using a combination of subsidiaries in Ireland, the Netherlands and Bermuda to reduce its tax burden, Apple paid just 0.005% tax on its European profits in 2014, the European Commission reported.

If multinationals’ profits were accounted for where the economic activity takes place, they would pay a combined US$500 to US$650 billion more on taxes each year, according to estimates by the Tax Justice Network and the International Monetary Fund. Of this, around US$200 billion a year would go to developing countries, which is more than they receive annually in development aid (US$142.6 billion).

Findings like this have put tax havens on the radar of US and European regulators, but there’s no broadly accepted definition of what makes a country an offshore financial centre.

Lists published by the Organisation of Economic Cooperation and Development (OECD) and the International Monetary Fund use different criteria to define tax shelters, and their outcomes are highly politicised.

Fichtner (a co-author of this article) provides a rough yardstick for judging OFC jurisdictions by examining the proportion between foreign capital, such as FDI, and the size of the domestic economy.

What none of these measures can tell us, though, is the origin of the foreign investment reported by these tax havens. How does Apple’s money get from California to Bermuda anyway?

By bringing together political economists and computer scientists in the CORPNET research group at the University of Amsterdam, it became possible to study how corporations make use of particular countries and jurisdictions in their international ownership structures. The novel, data-driven network approach of our study shed light on how offshore finance flows across the globe.

We looked not at country-level statistics but at detailed company data. By asking which countries and jurisdictions play a role in corporate ownership chains that is incommensurate with the size of their domestic economies, we were able to identify, for the first time, a complex global web of offshore financial centres.

We analysed the entire massive global network of ownership relations, with information of over 98 million firms and 71 million ownership relations. This granular firm-level network data helped us to distinguish two kinds of tax havens: sinks and conduits.

Using our method, we can now investigate which jurisdictions are used by corporations en route to sinks. These “conduit OFCs” are attractive intermediate destinations because their numerous tax treaties, low or zero withholding taxes, strong legal systems and good reputations for enabling the quiet transfer of capital without taxation. We found that a handful of big countries – the Netherlands, the UK, Switzerland, Singapore and Ireland – serve as the world’s conduit OFCs. Together, these five conduits channel 47% of corporate offshore investment from tax havens, according to the data we analysed.

Each conduit jurisdiction is specialised both geographically and in industrial sectors. The Netherlands excels in holding companies, for example, while Luxembourg favours “administrative services”. Hong Kong’s geographic speciality lies in connecting to the British Virgin Islands and Taiwan.

Our findings debunk the myth of tax shelters as exotic far-flung islands that are difficult, if not impossible, to regulate. Many offshore financial centres are highly developed countries with strong regulatory environments.

That means that targeting conduit OFCs rather than sinks could prove more effective in stemming tax avoidance. This realisation may help European Union and the OECD officials, who have increased pressure on cracking down on tax avoidance since the 2008-2009 financial crisis (to modest effect), by helping regulators better tailor their policies.

British Finance Minister Philip Hammond has speculated that the UK could become a European tax haven if the EU fails to offer it a good Brexit deal. But, in practice, the City of London is already a major offshore financial centre. 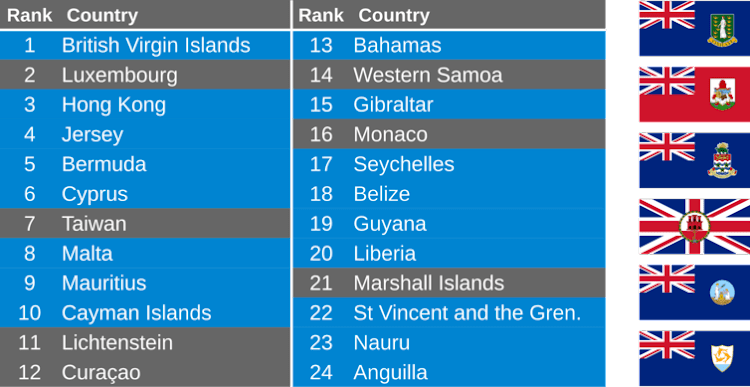 Of 24 sink OFCs, 18 have a current or past dependence to the UK, including major tax havens such as the Cayman Islands, Bermuda, British Virgin Islands and Jersey. New territories with low or no corporate taxes are continuously emerging as sink OFCs, but, as our study shows, there are just a handful of conduit OFCs.